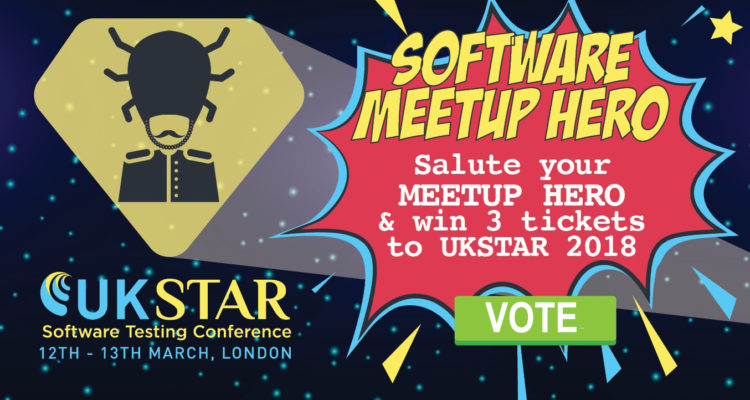 The Nominations for our Software Meetup Hero Competition have now opened. We had so many wonderful entries with testers looking to salute their Meetup Heroes.

We’ve narrowed it down to our Top 4 Nominees!

One of these lucky people will win 3 FREE Tickets to UKSTAR This March – 1 for themselves, 1 for the person that took the time to nominate them and put in wonderful effort making their case and 1 to give to whomever they want to join them.

We’ve condensed the winning entries into a few bullet points so you can see just how amazing these nominees are!

Once you’ve read all about them you can click the ‘Vote Now‘ button at the end and vote for the person you feel deserves to be crowned UKSTAR’s Software Meetup Hero 2018!

We will announce the overall winner December 25th Via Email

Best of Luck to all of our Nominees! “He’s also got one eye on the future and how the meetup can grow and become even more productive in building communities for the years coming forward.” “I have worked with and been managed by Dan at three companies over the past five years and can think of no one better to get recognition for all the work he does in the community. At every place I have worked with him Dan has been instrumental in bringing together testers and inspiring them to learn and grow, including myself. ” “I had the pleasure to work with Donata. She showed me and many others not only how to test but also how to learn to care for quality. Donata is a super star tester!”

Winner will be announced December 25th via Email

Best of Luck to all our nominees!